Tonight I had the opportunity to speak at #VirtualBostonAzure to talk about raising the visibility of security signals in your environment by turning on your WAF. In demos the WAF available in Azure Front Door was used.

Today I had the opportunity to speak at VT Code Camp #11 in Burlington, VT. As part of my series of talks on Running Azure Securely, my talk today was around defense in depth and was called Running Azure Securely – which of these Azure security features are for me?. The session was interactive, engaging a half-dozen folks in the audience in a discussion of how to defend various workloads using the (fictitious) page of photos app as a foil.

Azure offers thousands of security features. Some of them are easy to use and others are complicated. Some are free to use and some look really, really expensive. Which ones should I be using for my applications?

In this talk we’ll look at some ways to reason about which security controls you might want to apply and why. We’ll consider groups of Azure security features through a pragmatic lens of security best practices and defense-in-depth/breadth, but tempered by the reality that “more security” is not always the answer, but rather “what is the right security” for a situation. By the end of this talk you should have a better idea of the security feature set offered by Azure, why/when they might or might not be needed, and have discussed some ways to reason about how which are relevant you by helping you think about how to assess appropriately for multiple situations.

Do you have specific questions about the applicability of Azure security features already? Feel free to tweet your questions at Bill in advance to @codingoutloud and he’ll try to work answers to any questions into the talk in advance.

If you know your way around SQL Server, then you will find Azure SQL Database to be familiar territory. But some aspects are more familiar than others, which is especially true for security-related differences.

In this session we review the key differences around identity management and authentication (including multi-factor authentication), managing server credentials (or, even better, not needing to in some cases), how to audit logins (probably not what you expect), an overview of encryption and data masking options, and the supporting role of Azure Key Vault. We will also touch on compliance and disaster recovery to give the complete picture of powerful features you’ll definitely want to know about to protect your data.

This talk will cover relevant capabilities for both traditional Azure SQL Databases and the newer Azure SQL Managed Instances.

This talk assumes you are already familiar with SQL Server or another enterprise database.

On Tuesday July, 30, 2019 I had the opportunity to speak at North Boston Azure. The talk was part of a series on Running Azure Securely and was called Are all these Azure security features for me? and was not really a “talk” in that it was highly interactive. For those who attended, you will recall we filled in some slides collaboratively. Thus, they may not appear so polished for those of you who did not join live. Either way, please find the slides (“collaborative” and all) below. 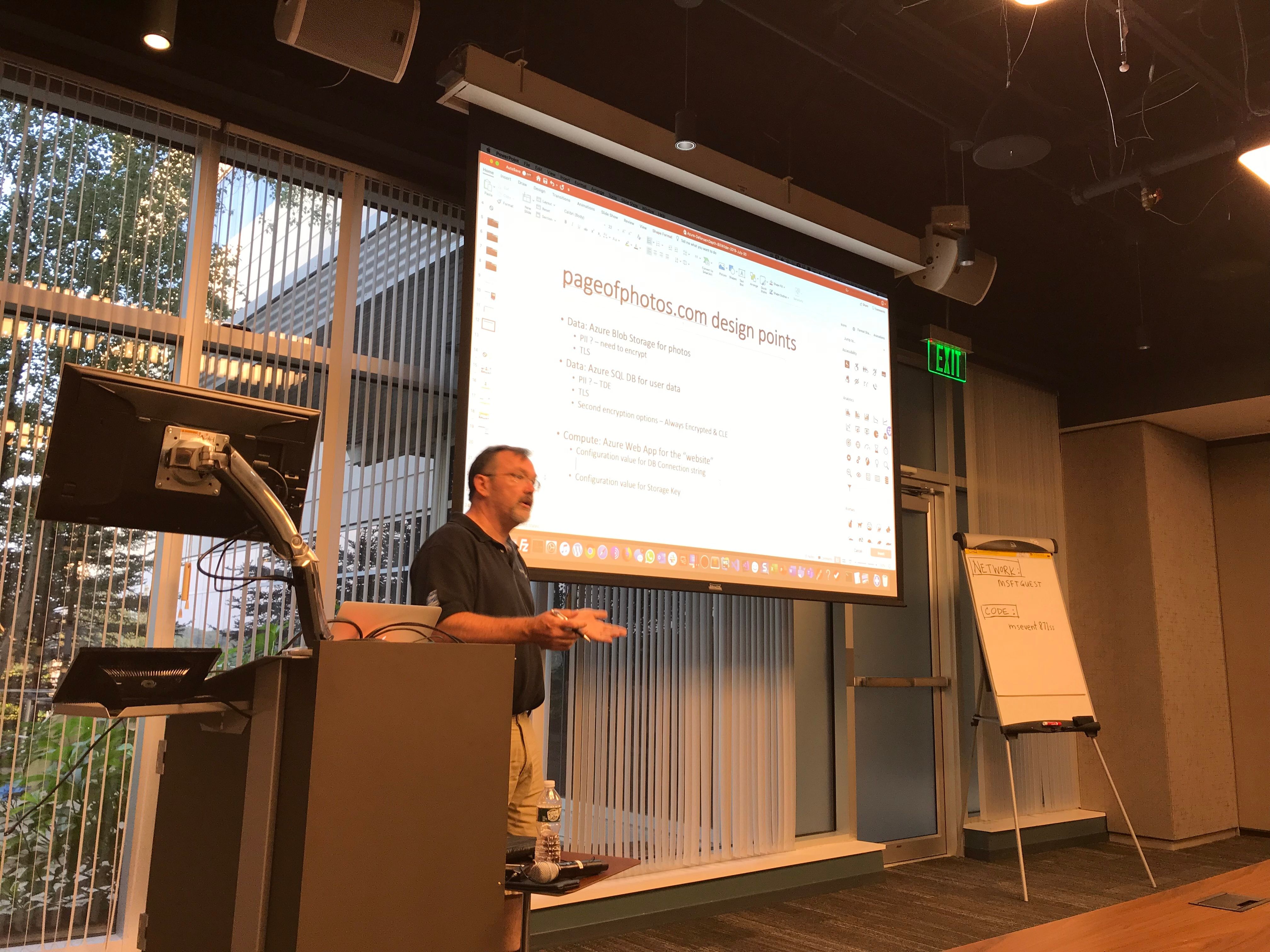 This was an experimental approach for me and the feedback from the audience tells me it worked pretty well. The group at North Boston Azure was already knowledgeable and engaged, so hopefully made for a interesting experience for all involved (was certainly fun for me).

Ever try to figure out how to track who logged into your Azure SQL database? You checked all the usual ways you might handle that with a SQL Server database, but one-by-one find out they just don’t work. Here’s one way to do it.

To track who is logging into your Azure SQL database, enable auditing (here’s how to do that) with audit entries directed to an Azure storage blob. There are two ways to do this: at the database server level and at the individual database level. Either is fine, but for the example that follows, auditing is assumed to be at the db server level. The example query can be adjusted to work with auditing at the database level, but one of the two auditing options is definitely required to be on!

Run this query to find out all the principals (users) who have logged in so far today into your Azure SQL database.

hosted with ❤ by GitHub

The output is something like the following, assuming if I’ve logged in 12 times so far today with my AAD account (bill@example.com) and 1 time with a database-specific credential (myadmin):

The query might take a while time to run, depending on how much data you are traversing. In one of my test environments, it takes nearly 20 minutes. I am sure it is sensitive the amount of data you are logging, database activity, and maybe settings on your blob (not sure if premium storage is supported, but I’m not using it and didn’t test with it).

Note: There are other ways to accomplish this, but every way I know of requires use of Azure SQL auditing. In this post we pushed them to blobs, but other destinations are available. For example, you could send to Event Hubs for a more on-the-fly tracker.

At most recent Boston Azure meeting I give (what turns out to be…) the first part of a multi-part talk on Running Azure Securely. Even though I did not cover all this content, I’ve attached the whole powerpoint deck below.

Please watch for a Part II to be scheduled.

I was pleased to speak at the O’Reilly Software Architecture Conference (#oreillysacon) in Boston today. My talk was Cloud Architecture Anti-Patterns: A concise overview of some bad ideas, delivered to an engaged, inquisitive audience.

Here is the deck:

Earlier today I had the privilege of speaking at the 22nd Boston Code Camp. My talk was Failing in the Cloud: A How To Guide. Thanks to those who attended (and persevered through the A/V system from hell!).

I’m on twitter at @codingoutloud. My book is at http://bit.ly/billbook.

The slide deck is here:

Like Loading...
I am a heavy user of PowerShell and recently I ran across an annoying problem that I didn’t find anywhere mentioned in the google. I was running the Add-AzureAccount cmdlet from the Azure PowerShell module. (Want it too? Start here. Or simply install it from the mighty Web Platform Installer.)
The Add-AzureAccount command usually pops up a login dialog so I can authenticate against my Azure account. But the behavior I was seeing never made it to that pop-up dialog – rather it quickly dumped out the following error at the command line:
As mentioned above, I could not find useful references to Add-AzureAccount “data is invalid” via search engine, so I tried a few things. I first updated to the latest module. Didn’t help me – but you can check which version you have installed as follows:
Then I tried both the -Debug and -Verbose command line options, which are often useful. But no difference in the output. So this was failing pretty early!
Since this might be related to some cached credentials, I tried deleting TokenCache.dat in case there was something funky there. Nope. Here is command to view – and then delete – TokenCache.dat:
Finally, a kind sole suggested I simply try hosing out cookies from IE. That worked! Since I was in a PowerShell kind of mood, here’s how I emptied the cookie jar:
(I learned of this technique on many web sites by searching for ‘clear IE browser cache command line’.)
My problem was solved, and I am back to productively using Add-AzureAccount.
Hope this helps someone!

Less than a year later, on November 17, 2009, Windows Azure was unleashed on the world – anyone could go create an account.

Only a couple of months later, on January 1, 2010, Windows Azure turned on its Service Level Agreement (SLA) – you could now get production support.

And finally, on Feb 1, 2010, Windows Azure became self-aware – billing was turned on, completing the last step in them being fully open as a business.

That was 4 years ago today. Happy Anniversary Azure! I am not calling this a “birthday” since it isn’t – it was born years earlier as the Red Dog project – but this is the fourth anniversary of it being a fully-operational, pay-as-you-go, public cloud platform.

At the time, there were 6 Windows Azure data centers available – 2 each in Asia, Europe, and North America: East Asia, SE Asia, North Europe, West Europe, North Central US, South Central US. (Ignoring the Content Delivery Network (CDN) nodes which I plan to cover another time.)

What about today? With the addition in 2012 of East US and West US data centers, today there are 8 total production data centers, but more on the way.

Here’s a map of the Windows Azure data center landscape. (Source data is in a JSON file in GitHub; pull requests with additions/corrections welcome. CDN data is TBD.)

The lines between data center regions represent failover relationships drawn from published geo-replication sites for Windows Azure Storage. Mostly they are bi-directional, except for Brazil which is one-directional; the metadata on each pushpin specifies its failover region explicitly.

NOTE: this is a work-in-progress that will be updated as “official” names are published for geos and regions.

Also, be sure to click on the map pushpins to see which data center regions are in production and where are coming attractions. Not all of these pushpins represent data centers you can access right now.

There are three insets in order – first a GeoJSON rendering, second a TopoJSON rendering (which should look identical to the GeoJSON one, but included for demonstration purposes, as it is lighter weight), and the third is the raw JSON data from which I am generating the GeoJSON and TopoJSON files. [All the code is here: https://github.com/codingoutloud/azuremap. I plan to blog in the future on how it works.]

The city information for data centers is not always published, so what I’m using is a mix of data directly published, and information derived from published data. For example, it is well known there is a data center in Dublin, Ireland, but where city should I used for US West region that’s in California? For the latter, I used IP address geocoding of the published data center IP address ranges. This is absolutely not definitive, but just makes for a slightly nicer map. It was from this data that I made assumptions around Tokyo and Osaka locations in Japan and San Francisco in California for US West.

Finally, this map is at the region level which equates roughly to a city (see the project readme for terminology I am using). A region is not necessarily a single location, since there may well be multiple data centers per region and though they will be “near” each other, this is not necessarily in the same city – they could be 1 kilometer apart with a city border between them.